Last Saturday I went to visit my mother in my hometown. I was pleased to be with her and it was also on the longest day of the year, summer solstice.  So on my way home, I decided to drive by the church where I was baptized and received most of my sacraments including matrimony.  What is lovely about sitting  across the street from this huge cathedral styled church is the river.  There are benches where you can look down and see and hear the water flow over the dam. 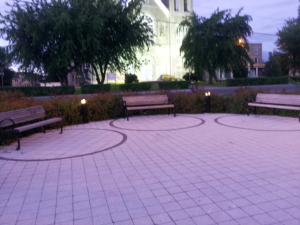 I like hearing the water rushing downstream like that. I could feel some of sombre thoughts float along with the current.    The river has always listened to me, somewhat like my private journal, only I don’t have to speak and I don’t have to write.  As I followed the flow of the water, I could see the sun setting in the east…so beautiful even this late! 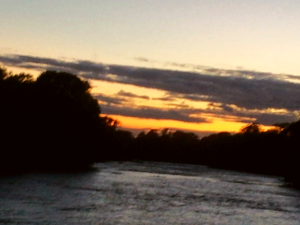 I noticed that the town has also added park benches and planted some flowers.  My eyes turned towards the humble garden.

deep in thought, until 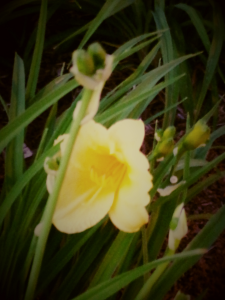 I was quite surprised to see only two buttercups blossomed in that huge mass of green leaves. As I got closer, you could see the buds of future blossoms. {I must drive down next week}.   It was still a beautiful sight and I was so pleased to be able to still capture some nice shots at such a late hour. It was 9;30 P.M.! But hey, guess that’s why they say it is the longest day of the year.  Seeing the flowers changed my mood.  Walking towards another bunch of bushes, I saw more buttercups.  I’m not sure if they will withstand the wind by the river but that bright yellow sure looked nice. 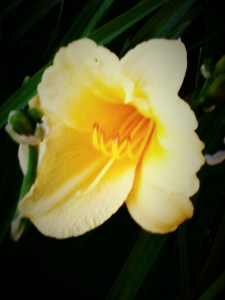 swaying in the wind