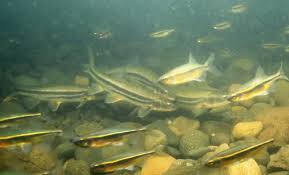 I used to love spending time at my GrandMaman’s house who lived by the river. I would spend mornings and afternoons on the dock, lying on my tummy watching the minnows swirling in circles and catfish jumping up now and then. I could never eat a catfish because they were like friends…pets to me. And the minnows would tickle my hand in the water and my ankles if I dared put my feet in the water. I say dare, because we were not allowed to venture in the water without an adult. I don’t ever remember disobeying that rule either. When I think of the freedom we had then that most children do not have today, I was pretty lucky to spend all that time alone with these little critters.

lying on the dock

Submitted for Tackle it Tuesday “Regularity”

falling leaves
the house comes
out of the wood

Our host writes:flowers of ice

on the window melting in the sun –
“look dad! it snows!”

Our host at Carpe Diem Haiku Kai has given us the Prompt “wings” and gave us a few quotes from Khalil Gibran in Sand and Foam.  However, when I think of wings there are several meanings that come to mind.  This morning I saw a haiku by MarkM Redfearn for this prompt.  I did not know it was an offering to this prompt at the time, but his haiku inspired me to write something about children, war and wings at “Do not weep for me” But after reading several times our host’s prompt I am reminded of two situations.

I like how our host describes how amazing it would be to fly and visit the world, look down at our planet from above. That would be so cool!  As children we believe that some humans can actually fly. My son certainly did believe in Superman when he was only two and a half. I was almost nine months pregnant with his little sister and I had gone into the house for a moment to check something on the stove. We lived in the country and my son had been playing in the sandbox when I had gone in. When I came out to join him in the backyard, my neighbor came rushing to me out of breath. My son had climbed the metal tower for the television antennae and was on the roof of my neighbour’s house.  He was singing the intro song of the show “Superman”.  I called up to him and told him to wait for mommy to join him, but my tummy was too big to manage the climb. Another neighbour’s teenager went up for me.  My son believed he could fly…Dear Lord, I was so grateful he had not jumped!

So when we talk about flying, that story always comes to mind.

My mother and I are very very close.  Growing up I always felt connected and even after I married (still young at 19) that bond was still very strong.  In fact, I remember at 22, we had moved about a thirty minute drive from her and I experienced separation anxiety for a year. Well, not like a child, but I had developed pain in my shoulder for a long time and a rheumatologist had told me to figure out what had changed in my life in the past few months and that that was the root of my pain.  I was quite insulted of his insinuation that it was psychosomatic but he was right. The pain went away on its own several months later.

Growing up as a teenager, I had never really rebelled or given my mother a difficult time like many teenagers naturally do. My parents had divorced when I was a teen and I felt even closer to my mother, wanting to protect her and take care of her.  It was when my own marriage ended, 24 years later, I moved 6 hours away from home to start a new life and a new career.  That was the first time I had actually cut the umbilical cord…really!  Indeed, at 40 something, I was finally spreading my own wings and becoming an independent woman.   I was definitely a late bloomer but better late than never, right?  I could not help but choose a photo of a dove to represent my moving on with my life.  In this case we are talking about separating from my mother, Colombe (which means dove)

Check out my latest post at Tournesol dans un jardin