spring is here
cleaning off the rust
workout

bathed in golden glow
peaceful contemplation
getting to bliss

She frowns at her sunlit streaked window from a long winter’s grime.   Stepping outside she feels the sun’s glow but, still too cool to make the windows squeal like giddy children.

In the meantime, she has plenty of work to do inside.  She grabs a broom and eyes the corners of the ceiling in each room.  The thought of uninvited guests make her want to scratch.

The front entrance is the next move.  She unlocks the door and peaks to see if a neighbour is in the hallway before she steps out in her tattered old hoodie and black leggings.

Walking home tonight the wind was so cold.  She was happy she had an extra sweater and her lighter winter coat was just warm enough but not toast.  She walked faster to create more heat and by the time she got to the Métro she was fine but not so fine when her bus arrived across the bridge…brrrr

Moon meets Jupiter
cool breeze clings to winter
drat where are my gloves?

One can feel the glow of the sun on the second day of spring despite the cool breeze. She looks out the patio window and sees how spring cleaning is overdue. Some things will have to wait until it is warmer like patio doors but still, it is refreshing to get a sense of renaissance…almost like those last hours of labour before childbirth.

Her son and daughter-in-law arrived March 20th, for a belated birthday brunch with an armful of assorted flowers. She was taken by surprise, expecting to eat out but never had she imagined such an array of beauty. Words of affection on the gift card warmed her heart. Several kinds of daisies with exuberant colours brought life to her living room and then her eyes set on those roses…

her urge to write
a therapeutic process
soothes the soul 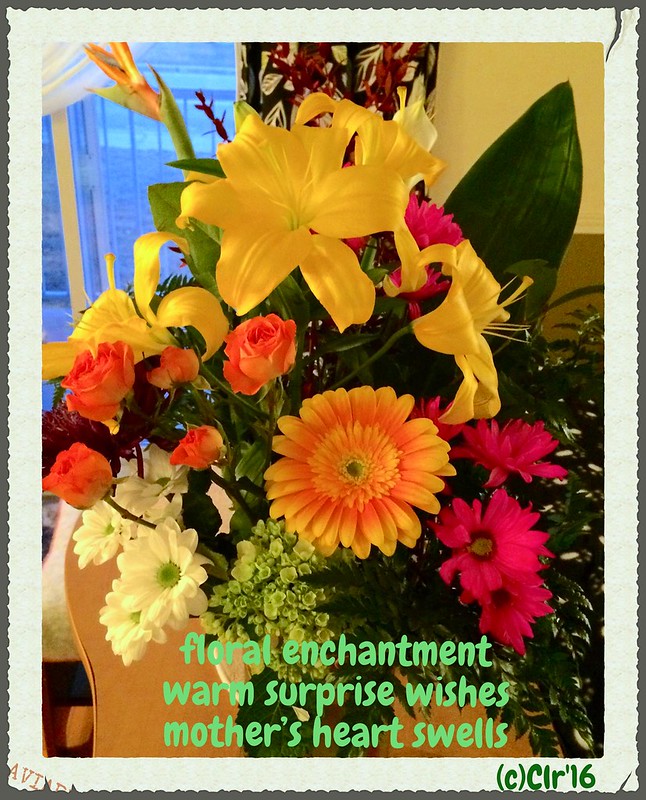 “Not another rainy day!!” Trula stomped her feet and threw herself on the couch and sulked.

Her nana rocked by the window and pointed her finger at her grand-daughter, “Child, you take each day as it comes. You cannot command the universe or turn your back to what the Great Spirit hands you each day. You will regret it some day.”  Holding her wooden beads, she whispered softly to herself but the only audible words were “protect her”.

Trula rolled her eyes and scowled at her nana. Year after year, it was the same thing when it was cloudy, raining, snowing or windy, Trula made a scene and refused to study and as she got older refused doing chores on the farm.

Several years later her nana died, when Trula was twenty-one.  The family buried her on the farm near an old oak tree where Nana used to sit and read for hours and later when her eyes failed her, she would pray and smile up at the sky giving thanks to the Great Spirit for each new day.

A few days after the burial, Trula was planting seeds in the garden and suddenly the sky turned dark.  An odd-looking cloud loomed over her and the wind picked up dramatically. Trula rose her fist to the sky in protest when suddenly she felt her feet lift from the ground and long tendrils pulling at her shoulder and head;  a huge CRACK resonated from the sky muffling the sound of a broken neck.

the universe rules,
appreciate each day
rain or shine

We are asked to form a haibun by adding a haiku to our host’s beautiful narrative; after writing one haiku, the image and moment had more to say so I wrote a troiku instead to be true to the experience I had reading this narrative.  Shall I call this  Tale & Troiku? or Traibun?  Perhaps our host can help me with this for I find myself writing a troiku with a narrative more often than naught.

A walk through the forest on a summer day. Birds are praising their Creator with their fragile voices. A warm breeze caresses the leaves, bringing them to a higher level of consciousness. Their rustling makes you relaxed and one with nature. Far away sounds of traffic making your experience even better. Then you walk onto a bright sunny spot in the heart of the forest, a plain spot of grass mixed with all kinds of colorful (field) flowers and there in the middle of that spot, you find a crystal clear pool with the most beautiful colored water-lilies. As you walk closer to the crystal clear pool you see a pair of deer. “Wow”, you think. “What a surprise”.© Chèvrefeuille

my morning mantra
chanting in the forest green
birds accompany

Heeding Haiku with Chèvrefeuille at MindLoveMiserysMenagerie

Twenty-five men left five days ago. The jeep left a trail dust riding over the hill where they were stationed. Today only twelve men returned but only five in one piece. It was their last mission before returning back home. They were anxious to see their family back in Canada but dreaded delivering the tragic news to more grieving families. Sergeant Harvey drove the jeep behind the compound and their mascot ran to greet them. Amir was a black Labrador mix and his loyalty was genuine.