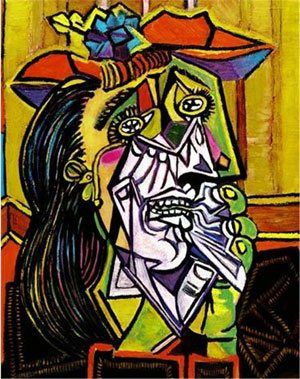 After a long night sponging the sweat off her patient’s face, she felt her grip her brown spotted hand.  “Ne t’inquiète pas…ça ne sera plus long ma fille, pousse fort une autre fois à la prochaine contraction.” * But then her weather-beaten face frowned…a tear rolled down her chin.  The silence was deafening as she placed the white sweet smelling cloth over the young mother’s mouth while the father took the lid off the shoebox.

*translation: Not to worry,my child, it won’t be long now… push hard at the next contraction.

This is one of many sad true stories my GrandMaman shared with us growing up.  I can’t imagine the sorrow she carried with her mixed with joys…

Our host, Chèvrefeuille says: “This month our central theme is “on the trail with Basho”, because Basho was a traveling haiku poet as e.g. Santoka Taneda was in his time (1882-1940). This month we will (try) to follow Basho’s journeys through Japan. And this first haiku which I will share here is from one of his earlier haibun (or travel-journals), “The Records of a Weather-Exposed Skeleton” (Nozarashi Kiko) in which he describes his journey together with his disciple Chiri along the places described by Saigyo, Basho’s great role-model;”

weather beaten
wind pierces my body
to my heart

Here is our host’s offering and he asks us to write with the Haiku Writing Technique baransu (in balance):

white peonies
memories of her youth
when Mother was there

Walking home with her grandson after a wonderful day in the city,  she could not help but admire the sky. Once, her grandson was sound asleep, she read about the sad news…such a loss in the world of haiku. And then, she understood the mysteries of the sky tonight.

dash of white clouds
stand out
in the night sky

dash of white clouds
splash of goodness
wings of an angel

And then she read this beautiful haiku  posted  by Chèvrefeuille at Carpe Diem Haiku Kai, after she had written the above troiku.

new beginnings
only spirits see the path
still, unknown to us

In memory of an artist, teacher and poet, Jane Reichhold.

Walking to work on avenue de Gaspé, she looks at the trees just starting to bud. A seagull screeches overhead. She smiles and wonders if he is announcing to his buddies of some overturned garbage can.

one lone feather
on this city street
where’s the white dove?

one lone feather
message from above
dearly departed

on this city street
searching for leftovers
doves and gulls

This is a troiku, created by Chèvrefeuille,  with a narrative, I now call a Troibun.

Title: one lone feather
Mother, are you really there?
Colombe, my departed mother’s name, is French for dove

(troiku)
first kiss – after,
a decade of solitude
stuff to write poems

first kiss – after,
too many years
like riding a bike

a decade if solitude
spiritual cleansing
looking within

Blogging from A to Z Challenge

E is for Emerald and my mom’s favourite colour was green makes this post all the more meaningful.   When I think of the word “emerald” however, I also think of Emerald City in the land of Oz which was the famous dream of Dorothy in the Wizard of Oz.  I was quite surprised when I read that this children`s book was published in 1900, written by Frank Baum and illustrated  by W. W. Denslow.  If you look at the illustrations, you can see the characters in the movie (1939) were pretty darn close.

Every October the movie played on television when I was growing up and my father would call my sister and me to come watch the movie with him and my mother. It was a tradition, sort of like The Sound of Music was with my children and other holiday classics.

No matter how many times I saw the movie, each time I would still fear that wicked old witch and her soldiers and those trees too!!! Oh, my goodness!!

I never realized how much that movie became a part of me until I was a young adult and read The Exorcist by William Peter Blatty and every night I was so scared of the devil (being Catholic we actually feared being possessed!) for three months after reading this book, I would cross my arms over my chest and repeat “I don’t believe in the power of the devil, I don’t, I don’t, I don’t” I became the Lion that lacked courage at 20 years old!  I never could see the movie…if ever it was television and I turned the channel on that movie by mistake, just a few seconds hearing a deep voice coming out of that little girl, I would have nightmares for days!  Yep, that’s how scared I was.

Emerald City was such a place to be and I loved the part where Dorothy is getting all prettied up ( my mother being a hairdresser made it  even more meaningful).  My mother loved Judy Garland (who played Dorothy) and even when her dementia was very advanced, I would sing Somewhere Over the Rainbow and her eyes came back to life.

Photo: Cheryl-Lynn Dec 2013, Montreal on my way home to the Métro

Emerald City
somewhere over the rainbow
dancing with Mom

Emerald City
answer to all your wishes
come true

somewhere over the rainbow
leprechauns fight over
a pot of gold

dancing with Mom
turning back the clock
unforgettable

Blogging from A to Z

Interestingly as I was looking for a word synonymous with never forgotten, I heard the voice of Nat King Cole crooning “unforgettable” in my mind, and just knew, Mom was near me at this very moment.

Sitting on the riverbank, she feels the coolness of the rapids and gently drowns in the moment…

Thoughts that tear her spirit, slowly slip into the water, flowing with the current, mending her soul. 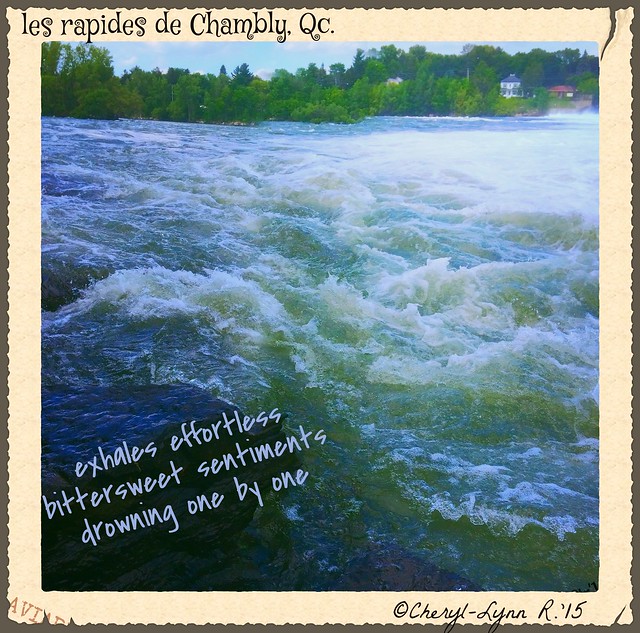 exhales effortless
bittersweet sentiments
drowning one by one

Late evenings she sits at her antique desk waiting. It was a test of patience that her creative mind endured every night.

under lit candle
waits to untangle letters,
like a magic potion

Written for 5 words prompted at the Secret Keeper:
TEST | POTION | MUSE | OWN | SIGN |