child soldiers
fighting their fathers’ wars
victims of our sins

lost childhoods
never reaching puberty
justice not for all

Parminder struggled thinking of her upcoming battle against the man who had  assaulted her. He was well known and a successful professional..  Parminder was a mere insect caught in the web of this vicious spider.  He was there to stomp on her to rid society of this nuisance.

She wept on the phone as she spilled her sadness and  anger to her friend. “I am only female!  I am a just an immigrant!  I am trash that society cannot even look at;  I disgust them.”

“How can anyone amount to anything when she has been groomed in garbage since she was born?” She cries for the child who was abused since she was young.

Her friend waits until there is a pause, then responds.

“What about the flower that starts to grow from the bottom of a pond in the muck and rises above the muddy waters, blossoms into a magnificent lotus?  Did it not come from sludge? What about the beta fighter who thrives in mud puddles?  Is it not admired in Western worlds for its beauty and endurance?  The world does not always know where beautiful and resilient people come from.”

There is nothing more precious when two people sharing a moment of grace simultaneously.

butterfly flutters
fanning its wings on her hand,
my cheek tickles

This is longer than the required 150 words at Heeding Haiku for Chèvrefeuille but it is a true story about despair and hope.  Also since it totaled 222 words and my mother’s numbers were 2 and she was born June 22nd, I knew I just had to share it.

raindrops on bamboo
shimmer in the sunlight
little diamonds
© Chèvrefeuille

reflects a faint glint
in his eyes – she breathes
his name 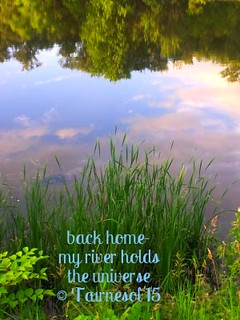 back home
my river holds
the universe
© Tournesol`15

I couldn`t decide which so I added these as well:

the river-
stories from afar,
show and tell

my river
flows in different
shades of blue and green

the river
brings the world
to me

Check out this lovely story with amazing photos of Koharu.

This haiku is for you Koharu:

Berri Métro Station is at the same location of the city bus terminal where many homeless people find warmth from the cold and cool air from the hot muggy summers. On the second undergrown level there are shops and a food court then a door opens to the tunnel leading to the pay stalls. In the tunnel there is a guitarist and you can hear the rare tinkle of spare change in the guitar case. About fifty feet before the stalls there is an amazing pizza counter…cash only and a makeshift interior terrace with  tables to eat. For $3.00 you can eat a point of  pizza  with a soft drink.

cash only pizza
window of opportunities
begging for coins

“The woman who follows the crowd will usually go no further than the crowd. The woman who walks alone is likely to find herself in places no one has ever been before.” ― Albert Einstein.

Fear not dear one
you know no limits
the world awaits

no boundaries
no limits that will bar you
believe in you

your potentiials
your power to rise
undying love

love amply
you will be loved
passionately

follow your heart
not the crowd who’s stuck
march further

seek curiously
live life like no tomorrows
believe in you.

Chèvrefeuille, our host today at Carpe Diem Haiku Kai has been very generous;  he has made a descriptive resumé of the various writing techniques of Haiku. I have also added this resumé on my sidebar if ever you want to check in at Carpe Diem.

Our host and Haiku mentor/master, Chèvrefeuille, prepares haiku prompts daily and sometimes three times in one day. The prompts are not just a word or sentence but also history of Haiku as well he spoon feeds us writing techniques.  I started off a year ago writing 17 syllables not really putting too much meaning into the form and have learned so much since then.  Check on the link below to see what he is teaching us today...Tournesol.

It’s Wednesday again and it’s time for a new episode of our Haiku Writing Techniques. This week I love to tell you more about one of the most delightful concepts of haiku writing, Karumi (or Lightness). The concept of Karumi isn’t a new idea, it comes from the other Japanese arts and Basho has tried to bring that Karumi concept into haiku writing in the, say, last ten years of his life.

Not so long ago I got a gift from Jane Reichhold, a copy of her book “Basho, the complete haiku”. You all will understand that I started immediately with reading it, after all (as you all know) I see Basho as my haiku-master.
Jane has put a lot of effort in this book, more than ten (10) years, and of course I was excited and anxious to learn all the wonderful haiku by Basho.
Basho has meant a lot for haiku. He created several new ideas and writing techniques and was really a master of haiku. During his life Basho became in a way a Zen-Buddhist (he studied under Butcho, a Zen Buddhist monk), however he was never really a monk, only during his journeys.
In his time the Japanese roads weren’t great, sometimes only small paths and travelers often were robbed  along the way. The most travelers chose to travel like a monk or priest, because that provided them free and save passage. Basho also traveled like a monk or priest, clothed in a black robe and a shaved head.

Basho had a big group of disciples and followers close around him, but also widely spread over Japan.
Basho, the traveling poet (he undertook his journeys almost all in the last ten years of his life), had one goal in his last years. He was anxious to spread his idea, his concept, of Karumi (Lightness) in haiku….”  reach more here